10 Times Satanists Proved They Are Not Evil Unlike Popular Belief

Whenever we hear the word ‘Satan’ we think they are evil people with cruel intentions and that they pray to the Devil. Satanism is a group of ideological and philosophical beliefs based on Satan. But unlike movies that show them killing people and craving for blood, real-life Satanists are, so not dressed in a black cloak, but actually donating blood, assisting victims of domestic abuse, and helping out the homeless. 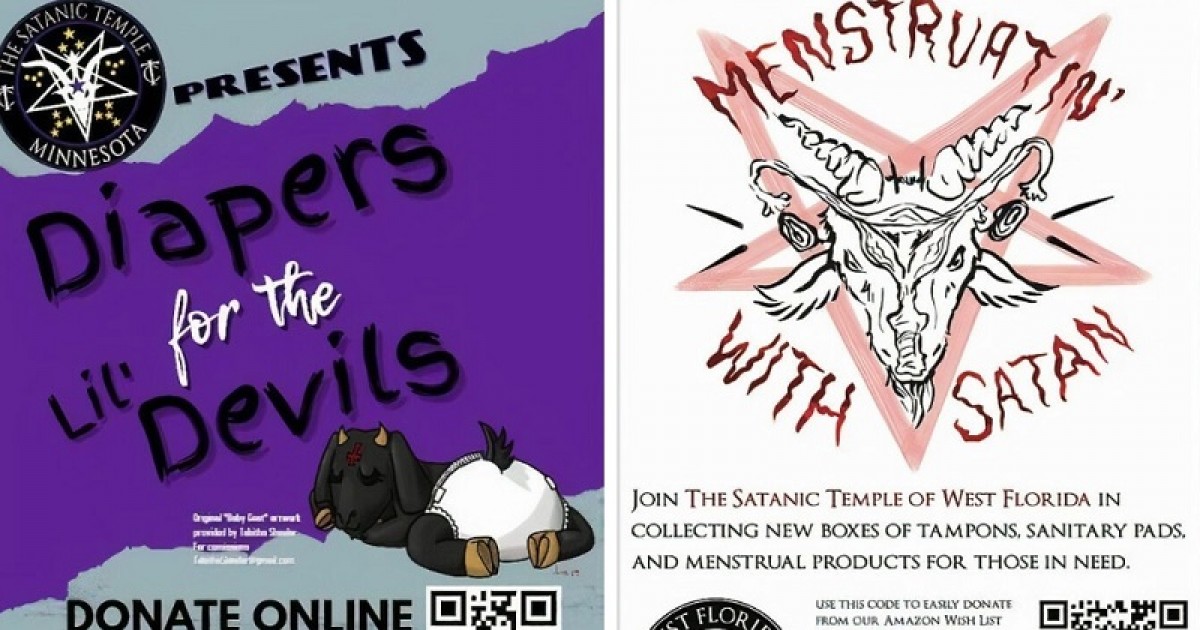 Not only ‘the Satanic Temple West Florida’ but also many other Satanic Chapters across the USA participate in such campaigns that make menstruation products, including tampons, sanitary pads, menstrual cups, and wipes available to anyone who can’t afford it.

Who Satanists Are And What They Believe In?

Though many think Satanists pray to the Devil, it’s not true. They actually observe Baphomet, whose figure is composed of a human’s body, a goat’s head, and wings. 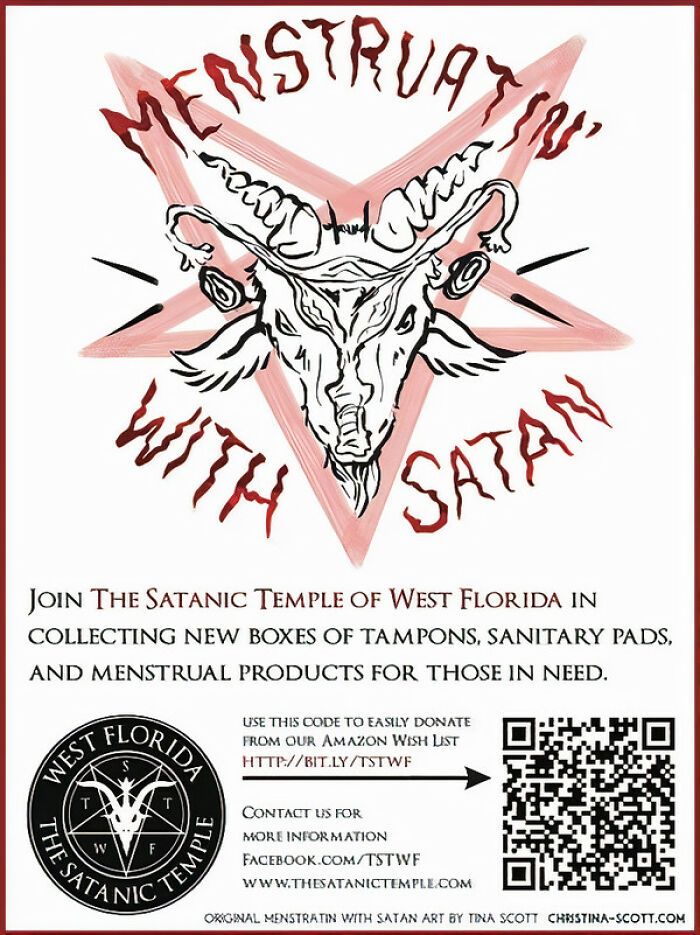 The Satanic Temple Minnesota is working on providing baby accessories to young struggling parents. They partnered with Simpson Housing services, which is a local non-profit organization, that support families with young children who suffer from homelessness. They have paired with them to carry out this much-needed drive. 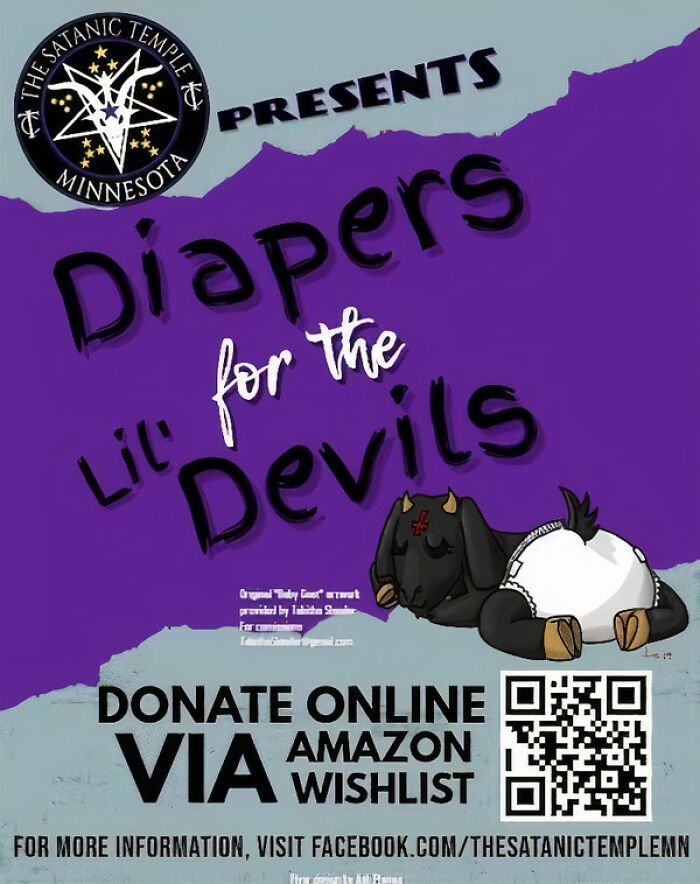 #3 Satanist Are Fighting Against Child Abuse At Schools

All the Satanic Temple Chapters have joined forces nationwide to fight the abuse that kids face in their schools. Satanists are fighting against corporal punishment, the use of physical restraints, restricting bathroom access, and violating other civil rights. 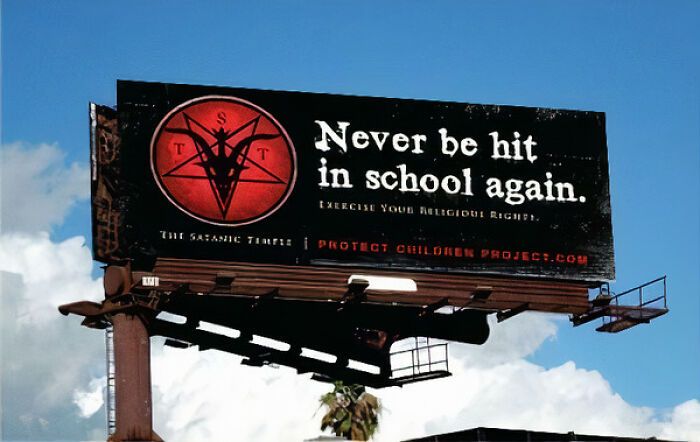 #4 Satanist Want You To Donate Blood And Save Lives

Satanic Australia is the first in the country to launch a charity event called “Blood For Satan.” They have used catchy slogans such as “Satan wants your blood, not your soul,” According to The Red Cross, this campaign has saved 252 lives to date. 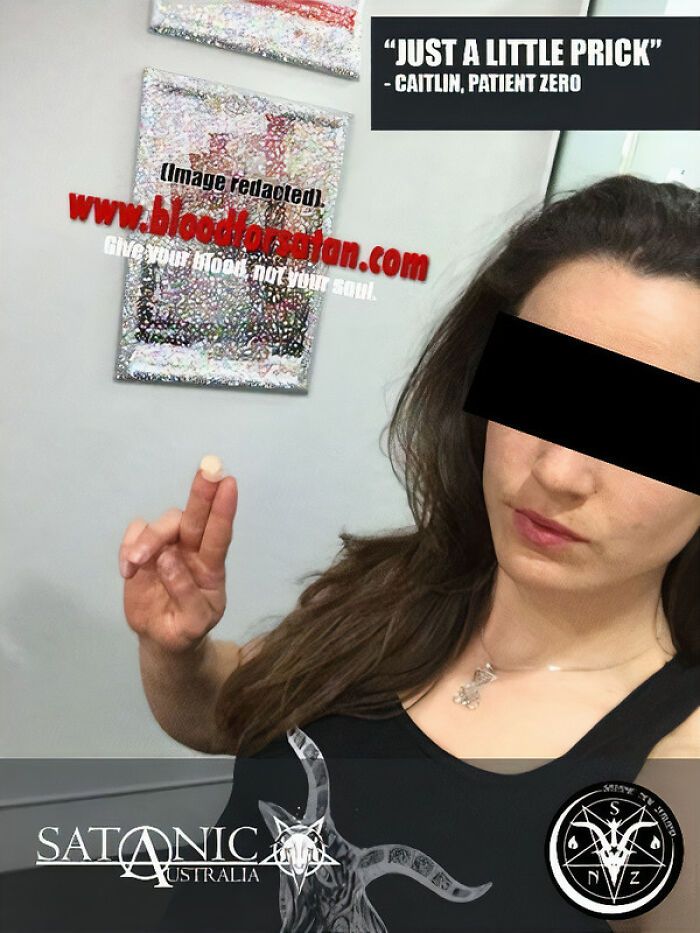 #5 Satanists want Homeless’ Feet To Be Clean And Unharmed

This campaign “Socks For Satan,” launched by The Satanic Temple Florida as a part of their long-running campaign, collects and distributes new socks for people on the streets to keep their feet warm, clean, and unharmed. 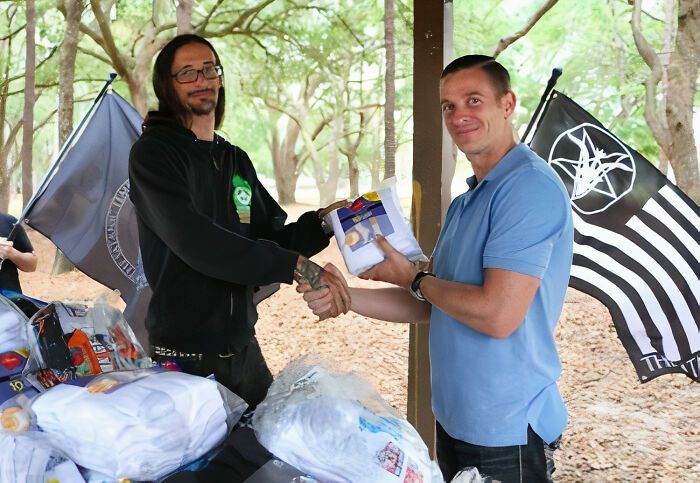 ‘The Satanic Temple Arizona’ has started a campaign where they provide business attire for People who are working to get out of poverty. Their drive collects casual and semi-formal attire and gives them to community members aiming to get out of hardship so they can look presentable in their job interviews and employment fairs.

“The mission of The Satanic Temple is to encourage benevolence and empathy among all people, reject tyrannical authority, advocate practical common sense and justice, and be directed by the human conscience to undertake noble pursuits guided by the individual will.” 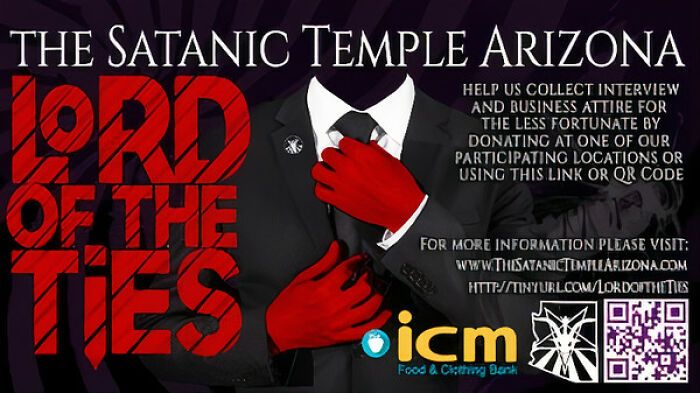 The Satanic Temple Austin is working with 21  more chapters to collect donations for SAFE (Stop Abuse For Everyone).

SAFE is an organization that fights against domestic violence abuse and conservative lobbying. 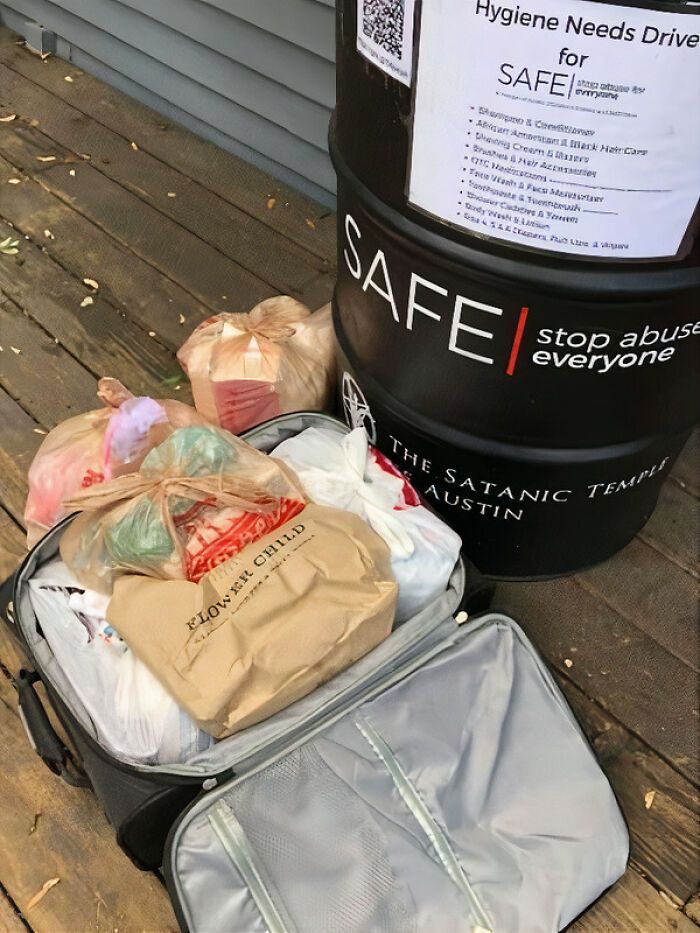 A clothing collection “Warmer Than Hell,” was launched in 2017 by Boston’s Satanic Temple Chapter, whose sole purpose was to promote religious diversity and bring warmth to those in need. The drive successfully provided 191 coats, sweatshirts, jackets, hats, and gloves as well as two large bags of socks and more than 900 dollars. 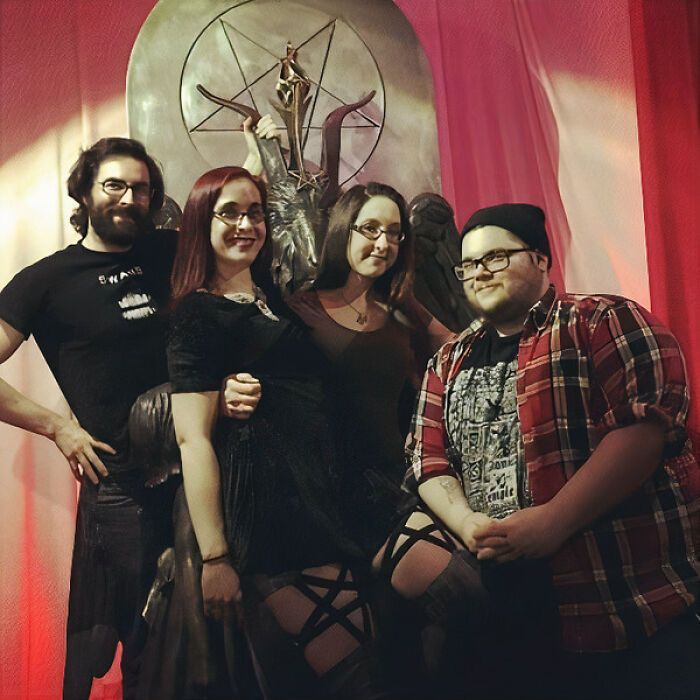 ‘The Satanic Temple Santa Cruz’ adopted a beach in 2018 and has devoted themselves to keep it clean of trash, while also raising awareness on how important it is. 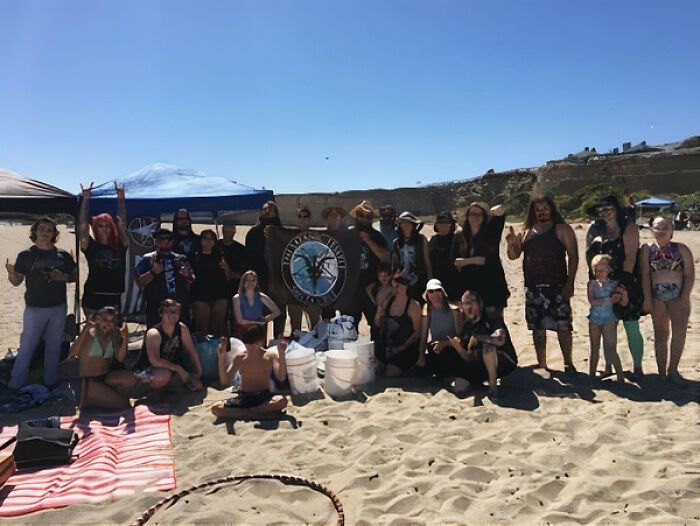 #10 Working With The Adopt-A-Highway Programs Across Different States

‘The Satanic Temple Indiana’ along with many other chapters participate in promotional campaigns aimed at volunteers to keep the highway clean across North America. 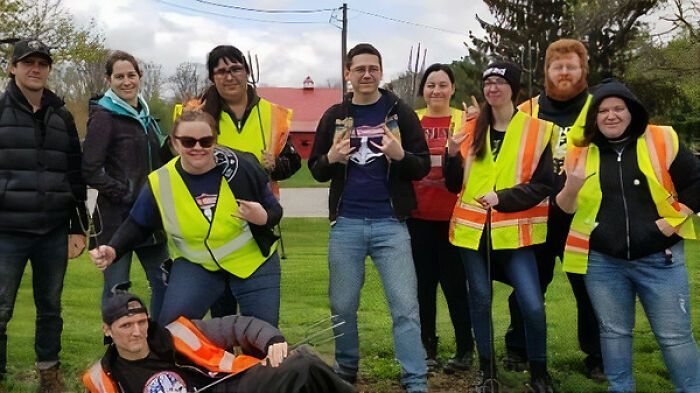